Skip to content
By Sharbani GhoshOctober 9, 2018Stories & Miscellaneous2 Comments on Ela and her reluctance to play Demigod

Ela and her reluctance to play Demigod 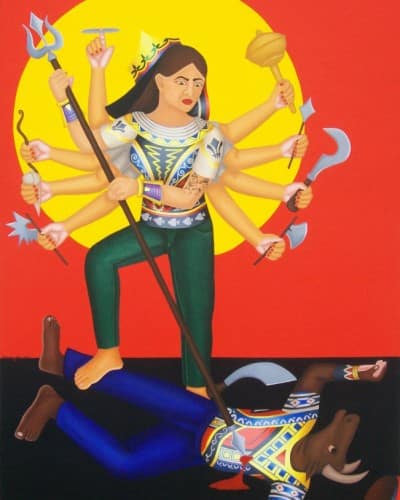 Like any other child, Ela was immensely attracted to participate in plays or drama during the Durga Puja time. Erstwhile, every year she always wanted to play the lead role and prayed for her selection for that role. However, there were only a few instances when she got the chance to portray the lead character.

There was one time when she was selected to play the role of evil demigod Mahisaasur – the one who is eventually defeated by Goddess Durga according to mythological facts. A tall young lady was chosen to portray the deity. The selectors were mesmerized by her long tresses, thus, making it obvious for them to choose her to portray Goddess Durga. After the shortlisting of the characters were finished, she began surging back home with somewhat shattered and unstable feelings. Somewhere inside, she wanted to portray the job of Goddess Durga not for the reason that now she needs to get spruced up as a male character, but for the reason, she would not like to play the role of a negative character. At that time, she was very much aware of the demigod that he was someone in the past who led people go astray.

With this dark vision, She went into her room and rested on the bed wondering if it would be a good idea to play the negative role. Right then and there, it was really a circumstance which made a disturbance at the forefront of her thoughts and she couldn’t center on anything.
Her parents sensed something was not right and asked her the reason for her silence all day. As concerned parents, they enquired whether her health was fine or not? She told them that she was upset about getting selected for the role of Mahisaasur and didn’t want to play that role.
“So what? “, her father asked.
“Oh really!! That’s great.” Exclaimed, her mother.
You should be happy you are going to play the second most important role of the Drama – “Mahisaasur Mardini”. Her father said.
No, I am not.
But why so?
I do not want to portray the negative character, she said.

“See child! you should not stress over assuming the role of a bad attribute character. If the bad was not there in any case at that point, how we could have differentiated it with good? What is great without the presence of awful?”

“Suppose, In the event that Mahisaasur had never existed at that point, Ma Durga couldn’t have shaped by every one of the divinities and Tridev(Brahma, Vishnu, and Mahesh). Simply after the demise of Mahisaasur, we as a whole came to know the genuine intensity of Maa Durga how she battled valiantly in the fight and prevailed in banishing the bad powers from this Mother Earth.”
“In the upcoming play, you will play an essential job. So pull out all the stops.” her dad clarified.

She listened to her father’s each and every sentence and it really affected her to the core and all her sadness just blew away. After few weeks of practice, she enacted the role of Mahishaasur happily and felt lucky while getting killed (in the Drama scene) by the actor who played Durga.

P.S: Ela wondered what Mahisaasur had on his mind while getting killed by Durga. Was he too happy (like her) to be killed by the Goddess to give recognition to her power?

Moral: Bad is important to separate it from Good, yet toward the end, truth wins regardless. If Mahisaasur/Ravan/Kansa were not there in the first place, we would not have known the importance of truth and righteousness. We should acknowledge angles together without negating any, and at the same time understanding each viewpoint, that we are conscious of a definitive truth. The god gifted power earned by pleasing God could not save Mahishaasur from his departure from earth due to his misuse of power and pride.

2 Replies to “Ela and her reluctance to play Demigod”